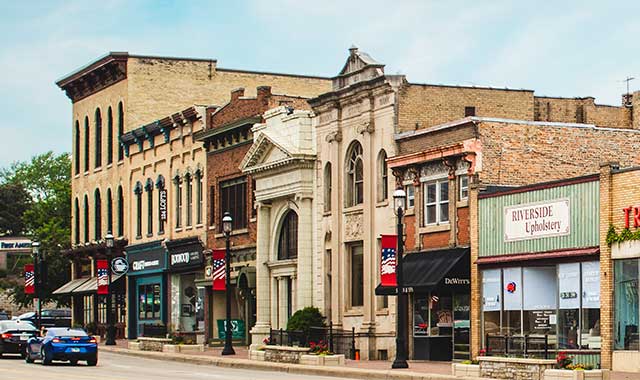 The Northern Kane County Chamber of Commerce represents the Village of West Dundee.

The Village of West Dundee develops its downtown with a significant investment in building stock with multiple authentic restorations and new businesses that include WoodFire Pizza, Bamboozels Bar & Grill, Craft Donuts & Coffee, Rochaus, an intimate live music venue, specialty retailer Boxwood Home Design & Cabinetry, Around the Corner Candy and 124 Lofts which offers urban-style lodging.  The Village recently completed a block-long extension of the river walk, bringing the amenity to the south side of Main Street for the first time.

Economic Development Overview
Over the past several years, Downtown West Dundee has undergone its most extensive renovation in decades.

In early 2017, the empty Ace Hardware building at 118 S First was removed and replaced by an expanded and improved public parking lot to support the downtown business community. The old Pump House/Fire Station at 98 Oregon were also removed at that time. Bricks from the Pump House were reclaimed and held, with the intent of building a new code-compliant structure designed to pay tribute to the original. Potential construction of this amenity will be considered for Stage 3 of the Downtown Improvements Project. Its usable space would support public events and activities.

The most dramatic change occurred on the southeast corner of First and Main (Rte 72). The complex of buildings fronting Main St just west of the Fox River were removed to establish a new public park area and riverfront improvements for public use. In addition, three new stone-facade dumpster enclosures were constructed to serve the downtown businesses. These improvements were completed in Stage 1. Stage 2 of the Downtown Improvements Project was completed in 2020, and includes additional riverfront improvements and additional parking spaces east of First Street.

Private investment has also changed the face of Downtown West Dundee in recent years, bringing many of the historic commercial properties up to today’s code compliant standards. A public/private partnership facilitated the complete interior and exterior renovation of the former bowling alley at 101 S First, which is now home to Around the Corner Candy, Shine Salon & Dry Bar and Pucci-Pirtle Law.

Downtown West Dundee will continue to transform as these projects are completed, and potentially others initiated in the future. Attached below is the Downtown Master Plan completed in 2015 and a broad overview of the Stage 1 and 2 public improvements that were realized from that plan.